I think one of the most inspiring things about Mark’s artistry is how stealth like he is!  Whether he is aboard an airmed heli or spending his free time at dog beach, Mark is always able to capture such raw emotions and warmth, which leaves his audience feeling like they were on the beach, sidelines or rescue themselves.

Such an amazing storyteller, Mark has once again effortlessly used his gift to capture the below imagery, from the aptly named town of Ritzville, WA.   Finding his inspiration this time from some burned out Café sign on his "Host Program" travels for AMTC, Mark only used his iPhone to create what one might call a slice into Americana.  You can almost feel the cold rain, smell the aroma of comfort food, and hear the soft mumble of the jukebox amongst the deafening silence of the diner.  But enough of what I think, below is a Mark's thought process which he sent me to coincide with the imagery so I would better know how to create this blog entry.  This story is much better through the artist’s eye.  Enjoy!
Until next time….
Charli
Mark’s Rumination:
C /- F E
I saw the sign from the Interstate...
I was driving from Seattle to Spokane. There is a very quiet part of the country after you pass through the Cascades where the land is very gentle and there are tons of rolling hills. Off in the distance to my left I saw the incomplete "CAFE" sign, so I quickly exited of the interstate and decided to check it out.
My eye was caught by the burnt out part of the A, and how desolate  and isolated the sign appeared.  Add the rain and it just intrigued me.
I was about an hour to Spokane yet, and I was tired of driving in the rain.
I shot the sign when I first stopped, but knew it would be best for it to be a bit darker after the sun had set, so I decided to drop in and have some dinner. I took a corner booth, and started watching what was happening in front of me. (If You ever have seen the movie "Bagdad Cafe" you'll know why I was intrigued by the place. The sign. The people dining that night. The haunting music of the movie would have been ideal here. I expected "Brenda" to come stomping out of the kitchen- asking for what I wanted.... http://www.imdb.com/title/tt0095801/    or    http://en.wikipedia.org/wiki/Bagdad_Café)
"Tonights' Special" was roast tri tips in gravy, with mashed potatoes and a vegetable. The coffee was strong, and my server was friendly. A whole cast of different lookin' characters were dining when I entered, but it was still quiet.  Each person was a true photo study on their own. I certainly could of introduced myself and asked for a photo, but it just didn't seem right to interrupt this setting, and I was tired after a long day of travel that started in YYC.
This place was situated on the outskirts of the small town, but obviously a stopping point for local truckers. One trucker driving for Franz Bread stopped in, another local greeted him and the server immediately poured him a cup of Joe. They started talking politics. I felt like NOT interrupting things with me starting to take pictures so I laid low, which I accomplished by merely looking like I was reading my iPhone.
When I exited the place it was finally dark enough to get some better style of images and this time the reflection of the red cafe sign in the water in the ditch gave me what I needed.
I shot it with my iPhone utilizing the Pro Camera App; NO special effects filters or other trendy Instagram stuff was utilized. Simply pure documentary photography with new type of capture technology. Only what I saw and what my eyes were adjusting to.
MM2012 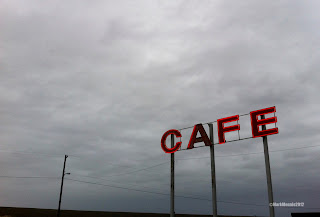 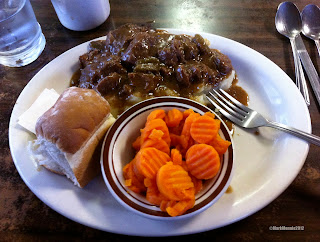 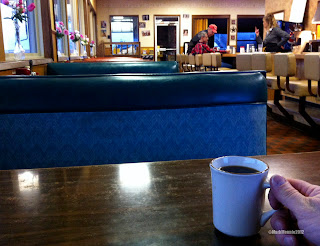 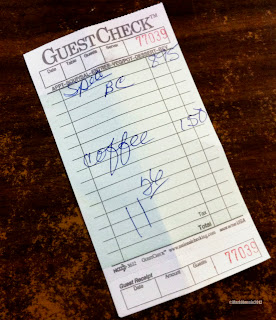 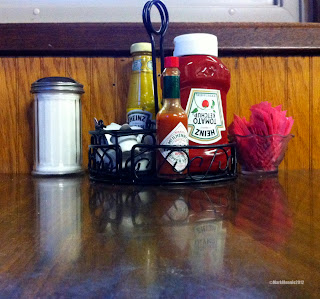 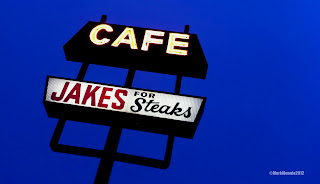 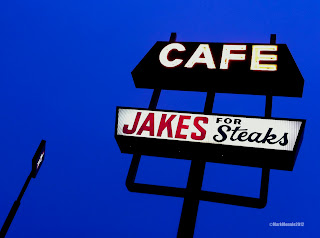 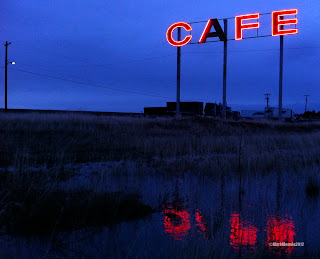 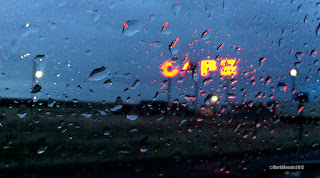 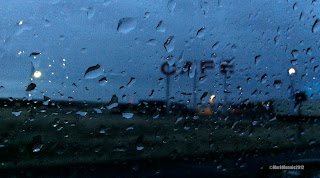 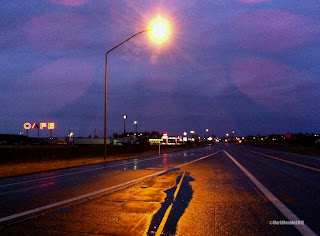