Back in June at the future site of the Air Medical Memorial in Littleton CO and with the help and inspiration from special friends of the air medical community, Mark debuted a thought provoking artistic installation of small flickering electronic tea lights.  Each light symbolizing a life lost in the line of duty and honoring the fallen, in a quiet night setting. The vision going forward for this special project was always for it's awareness to grow, travel to every and continue to pay its respects throughout the community.  The travel focused mainly at this time on ATMC and adapting the presentation to the host city's surroundings.  At AMTC Virginia Beach this year, Mark was able to do just that.  As well as exceed all his expectations and so much more.
As a long time coordinator of the AAMS Memorial Room, Mark always dreamed doing something more or in addition to the room of solemn reflection at a very busy conference.  Finally, with the input of several volunteers in October 2012, his ideas and thoughts came to fruition with Memorial Lights making its first appearance on the Sunday evening proceeding AMTC and with a second showing on the convention center grounds Wednesday following the conference closing.
On Sunday evening, October 20th, Mark orchestrated the most perfect Memorial Light installation on the beach.  Through word of mouth and one printed flyer, an overwhelming crowd gathered to reflect, honor and support fellow colleagues and the community as a whole.  A soft humbling musical backdrop was created with a collaboration of Mark’s three talented friends from across the country. It seemed as even the moon received the invite as it magically rose out of the Atlantic, glowing orange as attendees began to gather.  Below are lyrics to a touching song Never Forget written by Greg Hildenbrand, which called for the refrain to be sung in unison.  The melodic harmonies of the crowd as well as the waves crashing resulted in creating a more than memorable ending as so many different programs came together to pay their respects.
Wednesday night’s gathering took a bit of a different turn given the recent and very unfortunate tragedy in Tennessee the day before.  Mark, working with his volunteers, asked those gathering to take a few lights from their storage box, read and think about the names and place them as they wished in a small park area on the grounds the convention hall. Three new tea lights, and a folded flag became the focal point as a special statement was read in their honor.  Bagpipes played Amazing grace in the background, and attendees viewed the lights as they walked among them, some knelt to read the names, others took photos. Fighter jets from the local Airbase occasionally roared above but perhaps they were no match for the silent message being presented.
THANK YOU AND A WORD FROM MARK MENNIE: The Memorial Lights would not have been possible without all the support, assistance, creativity, hoop jumping, and love of some very special people.  A big huge THANK YOU to Alex Farnsworth, Temple Fletcher who were there at the start in Denver, then our local support from EMS Chief Ed Brazel and the city of Virginia Beach.Thank you Blair Beggan for your support, assistance and guidance. Musicians Craig Yale, Greg Hildenbrand, Tom Judge, Bagpiper Officer Bradley Canning. Thank you Kolby Kolbert for reading the message from TN, Tim Pickering for your insight, and Tim Nixon for your beautiful writing found here.  Also a thank you to Charli LeGette and Jean Levasseur for assisting behind the scenes in making a simple idea a reality.

This installation is a work in progress, and many new suggestions from attendees have been noted. Unfortunately, 4 more lights have been added again last week.

In addition my request for a "special case" to hold the lights in honor as they travel has been noted and I hope that design discussion will begin shortly. The capacity of this case is perhaps the greatest challenge this project will have.

The Memorial Lights will appear again, in Nashville TN, September 21st, 2014 at sunset. 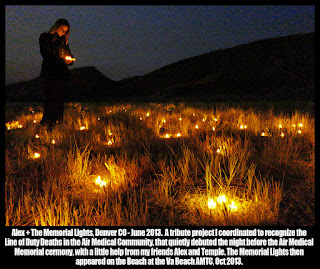 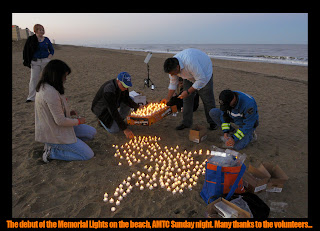 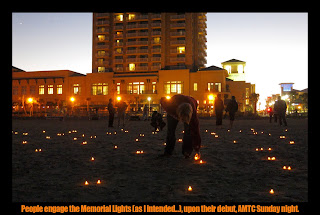 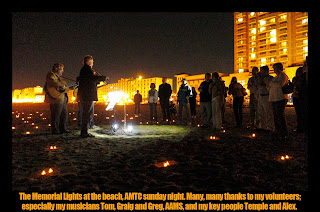 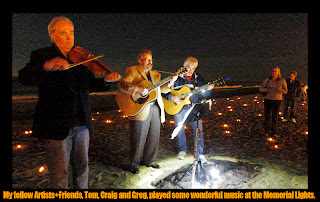 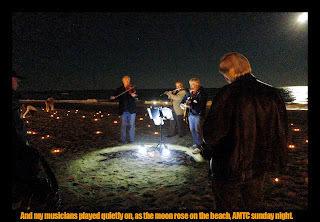 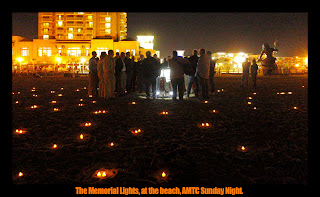 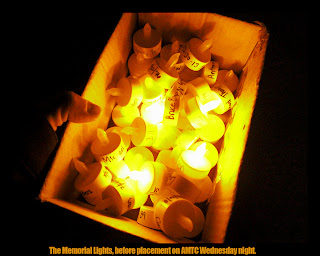 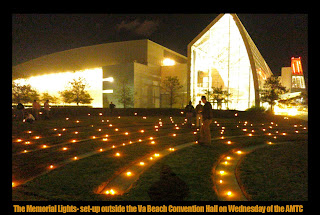 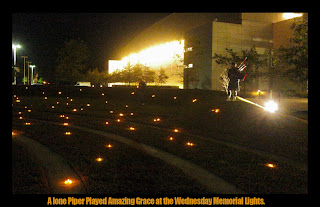 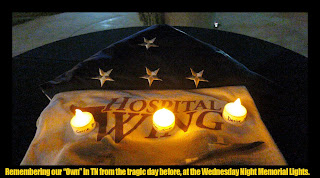 Posted by Following Mark Mennie, Photographer at 3:16 PM No comments:


Almost a month out we are finally getting around to filling everyone in on our AMTC Virginia Beach experiences.....many apologies but things have been just as hectic and productive post than pre & during.  Between follow ups, editing for Mark, some much need R & R, and regrouping & organizing we have been on the go!

Although the week was a bit of a blur for us all, the conference was very successful for Mark Mennie Photography and our entire team.  For starters it was nice to have OUR TEAM reunited…. Our newly restructured and rarely all in the same place at the same time team consists Mark, myself and our Montreal based videographer, Jean Levasseur of PHOCUS Productions.  Or as Jean apply named us the tripod in reference to our home coordinates on the North American Continent.  That is when Mark is sitting still in Calgary which we all know is VERY rare!

AMTC is a project that Mark basically works with AAMS on all year long.  Starting this past Spring, Mark began shooting the host programs in their elements to accurately depict the host city and the air medical community that serves the greater Virginia area.  The imagery captured, is then what AAMS uses for promotion leading up to the event and also what Jean uses to create magic in his Monday Morning Session Opener, which sets the mood for the entire conference.  This year both knocked it out of the park and their artistry was quite the talk on the streets!

In addition to all the pre-work and preparations, all three of us were constantly busing reuniting with old friends and colleagues and connecting with new as well as Mark and Jean covering the show with their photography and videography talents.  I could go on and on about all the events and activities of the week, but I will let Mark and Jean’s work speak for itself below.

Sidebar: Mark unveiled two amazing Memorial events while in Virginia Beach.  Both of which are much too meaningful and touching to include in this already lengthy piece.  Stay tuned for a posting on Mark’s Memorial Lights Installation. 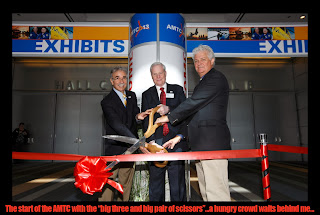 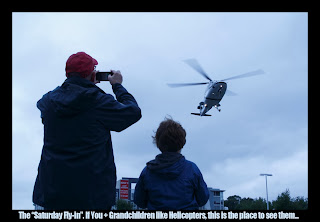 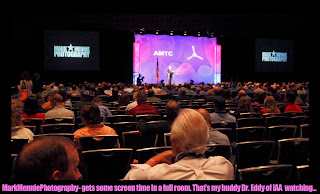 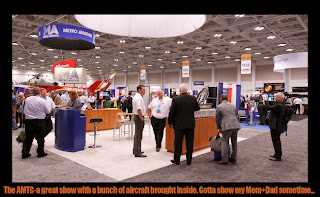 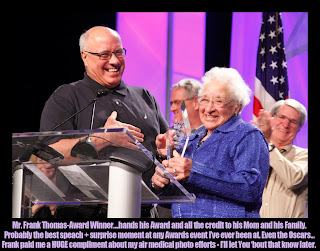 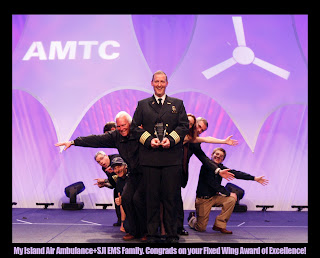 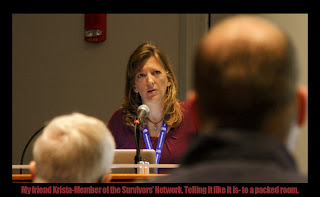 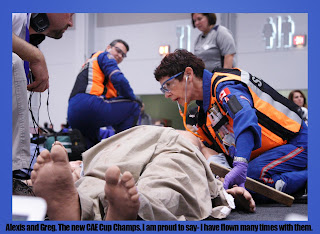 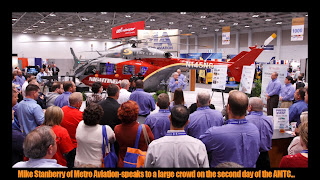 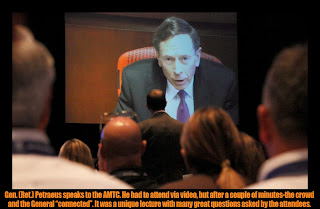 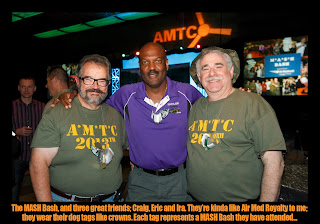 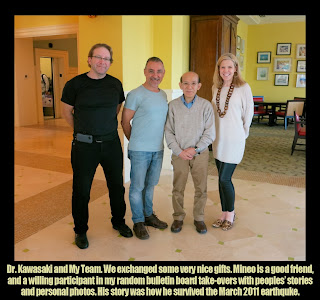 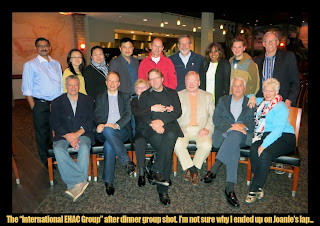 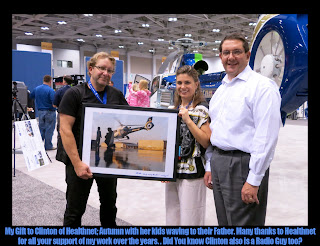 Posted by Following Mark Mennie, Photographer at 12:32 PM No comments: